Sexuality, a fundamental mechanism for maintaining genetic diversity in a species, is one of the most important traits in both the breeding and cultivation of a crop. The sex-determination systems of plants, however, have been exploited in relatively few species, and particularly little is known regarding dioecious (showing distinct male and female individuals) sex-determination mechanisms. We are attempting to uncover the sex-determination system in oriental persimmon (Diospyros kaki) and its wild relatives (Diospyros spp.), cultivars of which have been maintained in our orchard since the establishment of our lab in 1926.

The figure shows a working model for the sex-determination system with OGI (Oppressor of meGI) and MeGI (Male Growth Inhibitor) genes in Diospyros species. OGI, which is located on the Y chromosome, makes small RNAs and triggers transitive RNAi against MeGI transcripts, while MeGI represses androecium development.

Sex expression in plants is flexible and has changed with polyploidization and/or domestication. Maleness expression is determined by OGI genotype in cultivated oriental persimmon (D. kaki), as occurs in other Diospyros species. The sex expression of this species, however, is more flexible and complicated. We are currently studying to identify underlying mechanisms of flexible sex determination. At the same time, we are studying sex determination in other tree crops, such as kiwifruit and Vitis spp., to clarify the diversity found among sex-determination systems in tree crops. 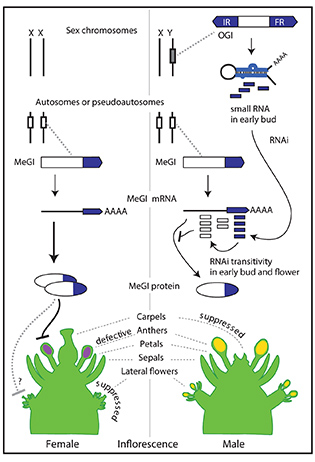 Figure 1  Chromosomal map of OGI and MeGI with model of their interaction and potential function in female (left) and male (right) flower development. OGI, which is located on the Y-chromosome, can trigger transitive RNAi in MeGI. On the other hand, MeGI acts as feminizing gene.